Congratulations if you've had a good year and commisserations if you think it wasn't that great.

The last week of the year was a lot of fun for me, primarily due to AB's wedding. So went to Hyderabad for the festivities. Man, were those some festivities! And it continued into Bangalore. Tonight i.e., New Year's Eve, will probably be the coda of the week-long wedding party. Hopefully :-)

Now if you don't know much about AB read this. I know I can't get that eloquent.

Anyway, back to me and the reasons that my week was most enjoyable.
Not just because of gathering of people, where people I knew only in nodding acquaintance were interesting to talk to and fun to hang out with. Not because of the Hyderabadi wedding food, where some Nizaami-cook-descendants made the most awesome biryani.

Because it was the first time I wore a shamla (a pagdi sorta head-dress, which was pink) and danced in a baraat. Even though the baraat was only 20 minutes long when leaving the house and another 15 minutes when we arrived at the hotel, it has to be said that it was the most rocking party! 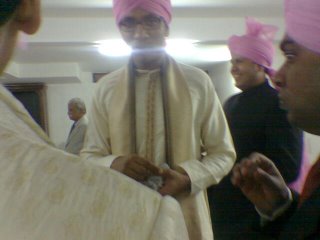 On the drive back, Duja and I stopped somewhere on the highway and decided to climb a little hillock. He looks up at it and says states "20 minutes" with all the experience of an regular climber. So up we went, a little wary of snakes and the thorny underbrush (or is it overbrush, never can tell). We climbed almost to the "summit" and took a few photographs, sat there like fools on the hill and came back down - all in 70 minutes.

Posted by Dilettante at 8:45 PM

Biznitch, and you're ditching us for a wedding party!

knowing all involved i am sure i missed a huge-ass celebration...well i am counting on wearing a shamla at dear dilettante's shaadi in 2006...hehehe....happy new year all...

Wedding parties are over and done with. For another 2 weeks at least :-)

And not terribly sure they wear shamlas at Gult weddings and NOT in 2006 anyway.

First time dancing in a baraat.
First time in a fuchsia sari.
First time I cried at a wedding.
First time I didn't (wasn't allowed to, rather) put on the fan at night.
All in Hyderabad.
(I saw lots of camels on the way back, too. Apparently they've been walked down south for bakr-Id later this month.)

Speaking of camels, the meat is called "Ottakam Mamasam" in Mallu land and its damn tasty. Like aged beef and less fatty. Would anyone care for some?

And Chamique, I know the feeling. Damn, I need my fan at night!