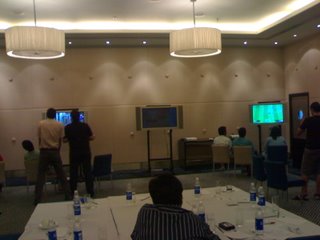 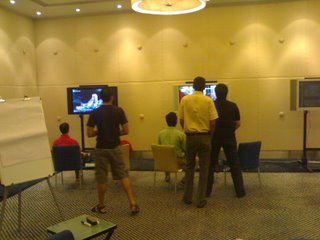 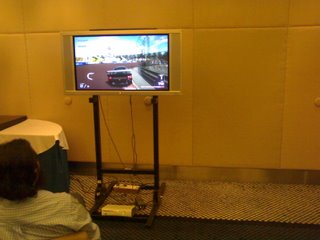 So Aleph, Abu, Dilettante and I were invited to a market research party, of sorts, where we had to play the Xbox 360 and provide meaningful feedback. Much fun was had but the general opinion was that the hardware is too expensive (Rs. 20,000 odd for the base version), there are too few games (which are also expensive at Rs. 1500 a pop), the controllers are way complicated and, as would be par for course for a Microsoft product, it hangs. That said, the game play does look good, the wireless controllers are a neat touch and Xbox Live can be a killer differentiator. Hopefully better sense will prevail and they won't use the brand ambassador they've chosen.

Oh, and they had a wicked good mango cheesecake for tea.

So you can now pre-order an Xbox. Woot! Woot!

Why is it that women are never included in these *ahem* 'market research parties'?

Other than busty Tomb Raider-esque caricatures which feature to feed the male gaze, women rarely figure in the (real) scheme of things.

20k is about cost price. it costs $450 in the US. considering that it doubles as a decent dvd player and jukebox, its not that bad a deal.
granted, the games are steep (thats where the loss taken on the hardware is recovered), but once you are on live, its worth it (or so i am told by my gamer friends).
what was the brand ambassador you were referring to?

anyone playing Live! from india?

Not to the best of my knowledge. The Xbox 360 has a launch date of Oct./Nov. So after that I guess...