So I was sitting at the new Coffee Day on Nandidurg Road nursing a Cappuccino awaiting a Police Clearance Certificate for my brother (those of you who know must wonder how he qualifies for one but I digress...) when I noticed they now bring the bill along with your order. 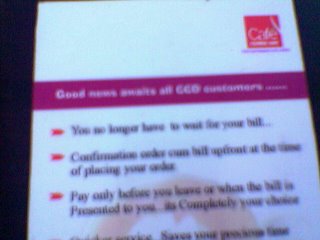 This is the explanation given. Me thinks it is a great way to turn-around tables quicker and cut down on the dilly-dalliers. Can you imagine the furore if Koshys tried a similar stunt? The protests that greeted their short-lived experiment in changing the sugar bowls was loud enough, this would cause tumult!

With this new logic, Coffee Day has no good reason to call themselves a coffee house anymore. Then again, they never did.

The real story however, was unfolding on the road ahead. Keep in mind Nandidurg Road is a one-way down towards Millers Road. Two girls on a scooter were motoring along and go past Coffee Day when it strikes them, “Damn! There be a Coffee Day here now?! Let's go!”. So they not only cut across two lanes of traffic but also against the flow of traffic causing much confusion and frustrated horn-blowing in their wake. The villain of the piece, a gentleman on a motorbike, has to brake at the last possible second to avoid collision, whereupon he remarks, “Iddu one way madaaam.” The ladies cannot seem to stand being challenged so they scream a few un-printables at him. He is unwilling to accept fault, poor guy he committed no fault, so says something to this effect, “Please don't be shouting, it was your fault and not mine. Don't be making angry!” The ladies seem to take this as open season and tear into him with the “Don't harrass women and don't you have sisters/mother/wife line.” The chap seeing he was outnumbered and outclassed stays mum and leaves. Now this is what really upset me, the ladies then say, “Damn, we be kicking his arse good! Oh, lets chase him and make more trouble for him!” and get on their bike and proceed to give chase. I did not witness the end to the incident.

A uterus is no substitute for a conscience.

I can't help but think I committed a crime of omission too.