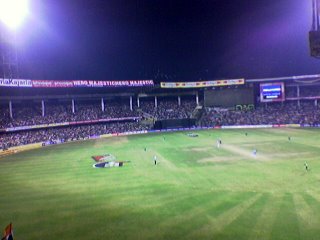 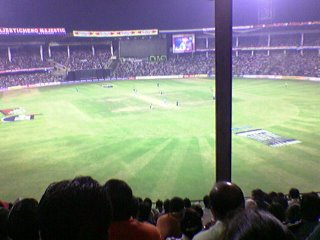 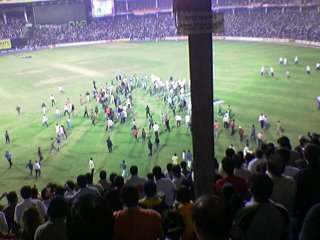 A few pictures from the match at Bangalore. A pretty stadium, a shiny bald pate and a pitch invasion? WTF? This is Bangalore, this is the South, we are Civilized. Given that the only stands which had direct access to the field were the "Special Invitee" ones it stands to reason that the political class that populated those stands....never mind...its a sorry tale....

The fan as big as The Ritz and other pictures

Pictures from Hyderabad, from last month as well as yesterday 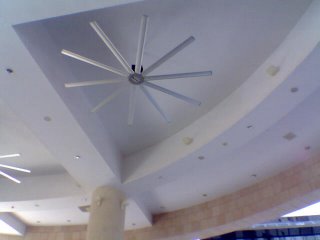 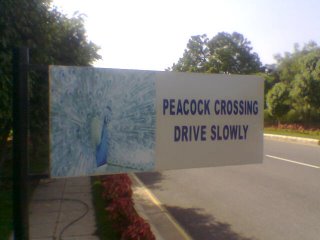 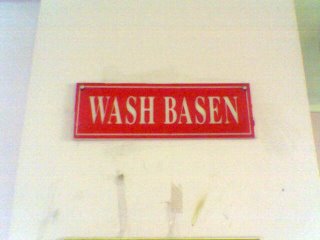 Actually, I have this entire collection of Jobless Pics of signs in restaurants. That'll be another post, another day.

Posted by Dilettante at 1:21 PM 2 comments 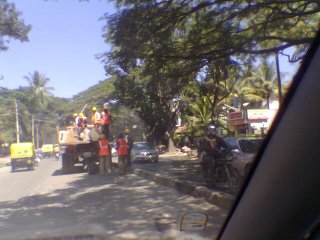 Posted by Dilettante at 2:28 PM 0 comments

The Recognition They Deserve

When all hope is lost and there is no one to turn to, we always have the WWW for comfort.

Who writes these lyrics, man?

Posted by Dilettante at 1:01 PM 3 comments 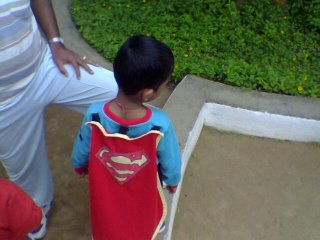 From the Jobless Pic Archive.

Posted by Dilettante at 8:46 PM 0 comments 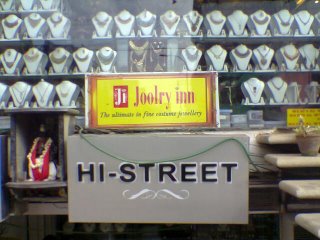 They've spelt it so people can pronounce it 'Joolry' and not 'Joowellery', no? 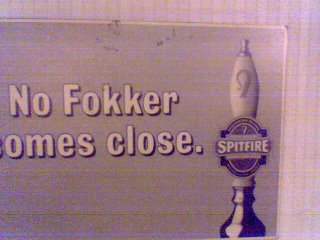 This vintage adveritsement in The Tavern, for a brand of beer named Spitfire.

One always eats out.
Meeting friends from college for coffee, friends from school for dinner or, somewhat unlikely, an interesting single woman for lunch. Things get worse when friends from out-of-town are visiting as they did when Asok and MomX were in town during the Diwali week.

Then Dabba put this post up, which we dissected to minute detail after a particularly satisfying dinner at Arabian Savoury, which incidentally was introduced to us as 'Saffuri' by a Jordanian friend of ours. Arabian food made by Mallus - therefore authentic. Or not, but the Sharjah and the Rolex are hard to argue with.

So I decided to make the affluent version of a hypothetical weekend out with significant inputs from Bangalore Bytes.

Be aware the following weekend is not necessarily affordable only for those who hold platinum cards or are mentioned in the Volcker report, which is not to say it's affordable for normal folk such as myself - it's not.

Dinner at fiorano. Next to Sukh Sagar in Koramangala.
Chef Max Orlati, who formerly was with the Taj Group operates the restaurant. When the Head Chef is also the owner, hence making what he wants to make, the results can be quite spectacular. As is the case with fiorano ristorante.
Do the Chef's Menu when suggested - antipasti, entrees, dessert with wine. The seafood is particularly well made. A fairly decent sized vegetarian selection and not more than 2 chicken dishes are available. Lots of pork on offer, also. Not my meat though.
Many times they don't bill the starters and dessert or give you a large discount which makes it quite an enjoyable meal. If they do bill you the prices indicated on the menu, let's just say you'll be thanking a Mr. Hussein for donations made to you.

An alternative to this would be iTalia at the Park, similarly expensive, similarly chic and a tad more accessible, being at Ulsoor, sorry Halasuru. The Pizzas are excellent, so is the Tiramisu. No chance of any freebies here though! You eat, you pay, you cry.

Lunch at Sunny's alfresco. If you can look past the waiters giving you attitude. Or them charging you for extra portions of garlic bread. And make sure you leave nothing to doggy bag, the bagging ain't free.

Then again, Spiga or The Only Place might be a good alternatives but not in keeping with the Expensive theme.
Evening piss up at Bangalore Club's Umbrella Bar or the lawns. Go partying at Athena, Leela Galleria or piss up more at The Blue Bar, Taj West End. The bar (in some establishments)closes at 11:30. Reopens at 12:30. Closes when the police come back at 1:30.
Late night bite at Monsoon, in The Park "Sir Terrence Conran designed this joint" hotel's lobby. Thai food and Pizzas are good. Even better, the Grilled Bacon and Egg and Cheese sandwich. However, the legendary Mudpie has lost most of it's charm. And taste.

The Leela Brunch at Citrus. Drink champagne until they throw you out at 5 pm. Then loiter around, perhaps at the ChaBar for some wonderful Japanese Green Tea and a Blueberry Muffin and there and go to TGIF down the road to make use of the happy hours and order the 1+1 beers. They serve Castle Lager these days. So you can go next door to Indijoe and do the 1+1 Kingfishers.
A new alternative to the Citrus brunch is the one at Olive Beach. As expensive, maybe not as good but a better array of booze and PYTs.

Lead us not into Temptation

Dabba, MomX, Bal and G were sending it outside this cool wine shop. The thing with this wine shop is that it's just a store but a lot of it's patrons purchase their poison, exercising their fraction calculating skills, ("Guru, ondu quatter kodi") and drink under the standing-room-only awning.

Guess these things happen only in Bangalore. Small mercies for the Cinderella rules.

So I say "What happens when the cops come here? Do they lathi everyone away?"
MomX tells me that there are a few cops sending inside, presumably off-duty, sending it.

That brings us to the first Jobless Picture on this blog. 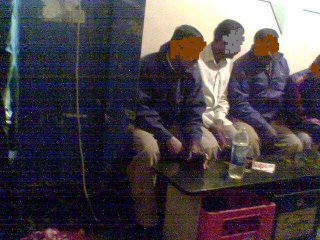 Set up my blog, that is. Can now post Jobless Pics, Useless Links and occasionally rant/reminisce about the City that used to be.