I've just returned from three days spent in and around Kolar district visiting various farms. The stand out feature has been the glut in tomato and carrot harvests this year. Of course, this is really nothing surprising as it is pretty much an annual event. So much so that there are food processing companies that count on this excess production such that they run their factories only between January and April. This year, the 'normal' harvest was upgraded to a 'bumper harvest' owing to the above-average monsoon last year and the fact that the lakes and tanks have held much of their inflow due to new rules prohibiting use of the water on wasteful activities, which has also made for some fabulous swimming holes.

Now, the government in all its wisdom, has announced a minimum support price of Rs. 2/kg of tomato, which might be laudable if it weren't for the fact that anyone who brings tomatoes can avail of this generous offer and not just farmers. Which has led to middle-men buying produce, at fire-sale prices ranging from Rs. 0.25 to Rs. 1.25, from interior farms (also from outside the State) where news hasn't trickled in as yet, bringing the produce to the Kolar APMC yard and flogging it to the government. And others are loading their vehicles with stones to add weight, and still more, recycling the discarded tomatoes to collect reimbursement a second time. Oh, and what is the government doing with the tomatoes? The pictures will attest. So much has been discarded that even the cattle and sheep in the district refuse to eat it anymore. Stupid, stupid, stupid. The happiest people are the weigh bridge owners in and around Kolar as they have been nominated to weigh all the incoming produce. The net result is that Kolar District pretty much smells like a ketchup bottle or a rotting mound of vegetable waste, depending on the freshness of the tomatoes of course. Chamique's suggestion, La Tomatina of course! 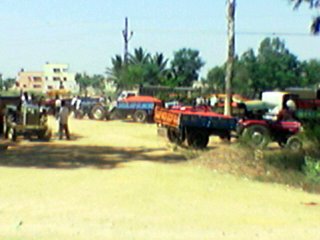 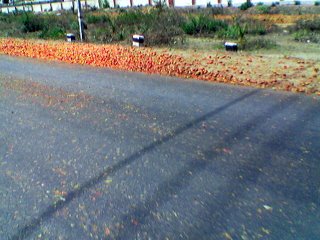 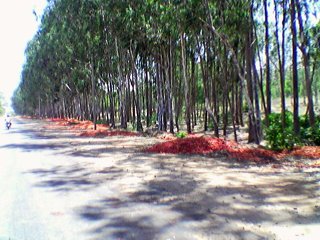 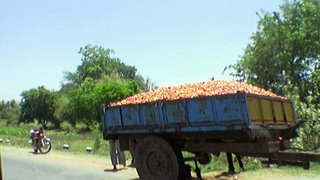 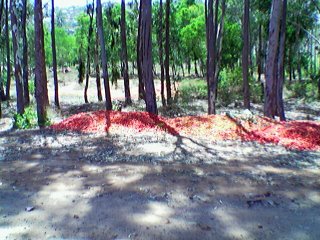 I also visited a nearby temple popularly called Dakshina Kashi. It's one of those adverts for the myth of Indian communal harmony what with it being sandwiched between two Dargahs. It's a very long climb to the top all the while being pestered by monkeys and the occasional deer. The stand-out feature of the Nandi Temple at the peak is that it has a perennial water source irrespective of the aridity of the countryside. Of course, the ASI might be having a good laugh what with the ill-diguised masonry work behind the spout, a maze of pipes and the too many intricate valves for something that is apparently divine! Skeptic? Me? 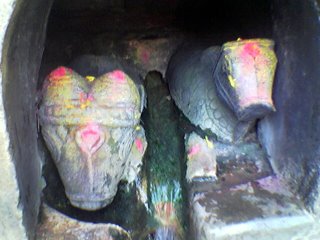 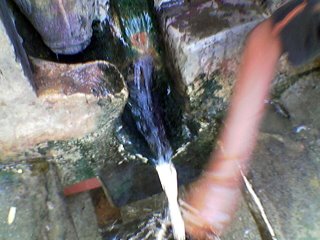 I propose a Tomatina festival!
And the force-feeding of tomato pish-pash to all middlemen until the rotten smell disappears completely from Kolar.

*Dilettante gags at the thought. Falls off chair.*