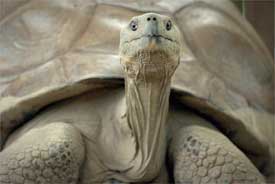 She was reputed to be the oldest creature on earth and was once Charles Darwin's pet.

A piece of me died with her.

Its a stupid fucking tortoise. Get the fuck over it.

How I wish it were that simple.

Boo hoo! Fucking stupid mofo. 'Harriet died and my world is ending' Get over it.

A really old tortoise which was in the Calcutta zoo (I think) died recently. It was in the papers.

What does the tortoise mean to you?

the world's oldest living creature is Zohra sehgal. And last i heard, amir was pimping for her.

Well, we might not be able to go see Harriet, but there are still platypuses around. I hope.

(As for anonymouses spouting profanities, why not moderate? Certain comments are annoying more than distracting. And choosing to be anonymous says as much as the comment itself.)

Would it be platypuses or platypodes? Either way, I wonder where the closest one is, suggestions anyone? That said, I thought they were cute little buggers till I read this on Wikipedia:

"The male Platypus has venomous ankle spurs, used in vicious territorial battles and fights over mates. The venom is not normally lethal to humans but produces excruciating pain and swelling that lasts for several months. "

[Weasel-y escape route below]
(2) Nothing in sub-clause (a) of clause (1) shall affect the operation of any existing law, or prevent the State from making any law, in so far as such law imposes reasonable restrictions on the exercise of the right conferred by the said sub-clause in the interests of the sovereignty and integrity of India, the security of the State, friendly relations with foreign States, public order, decency or morality, or in relation to contempt of court, defamation or incitement to an offence.

Lawyers, I tell you!