How Not To Rebrand.

So it would seem that we're about to un-brand our once beloved, now despised, city. Brilliant move, what? So much so that they're touting the old name on posters. More appropriately, brand Bangalore was the best. 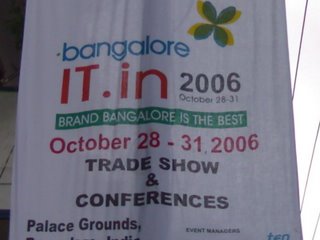 Some how, Bengaluru IT.in doesn't quite cut it. And what's with the "Bengal" in the name? Stupid white peoples are bound to think we're an offshoot of the Red Brigade. Hello? We're two thousand kilometers to the South. Idjuts. But then again, we can always "Swalpa adjust maadi".

I must also congratulate Adithya Gadwale, among others, who has successfully staked his claim to a pound of flesh by squatting on bengaluruit.com. Yes, it sound disgusting. And yes, he's a Cottonian.

Advertising gurus and marketing mavens who read this blog (yes, both of you!) please be telling what you be thinking...

Nothing some Mysuru (or whatever the fug the spelling is) Mallige can't handle...

it's been three days, and we haven't seen a name change yet... i think you'll have to get a new login

Just a thought: I speak English primarily, and French as a 2nd language. When I am speaking English, I pronounce Paris as “PARE-iss.” When speaking French, I say “Pare-EE,” which is what the French say.

It would sound really, really silly and be very distracting (”where? oh, you mean PAREiss”) if I said “PareEE” when conversing in English.

In Kannada, it’s Bengaluru (although I would really appreciate a standardization, as it seems no one can agree whether it’s Bengaluru, Bengaluroo, or Bendalakadu…?).

Also, who is going to take to task the many, many bad transliterations from the native language into Roman script? Delhi, for instance, is not spelt Delhi in Devanagiri/Hindi. It’s “Dilli.” The bad transliteration leaves us saying DELL-hee, which is wrong. Same for Pune, which should (in Roman letters) be spelt Poonah, like it used to be. “Pune,” in Roman/English, is actually pronounced “Pyoon.” It’s misleading, and wrong - that is, if you are speaking and spelling in English.

Yes, I find it strange that people have a hard time accepting that places can have dual or even plural identities. Then again, this name change was ostensibly to reawaken the local spirit or some such rot.

The problem in maintaining the English language pronunciation is that they don't want one to exist. Much like schools teaching English, even if it is illegal in some archaic way. The Kannadiga is officially a stranger in his own city and has no other way of reasserting his linguistic pride.

The same Ananthamurthy says that "We took so much trouble learning English. Half our lifetime was spent in adopting the usage of a foreign language." This is his vendetta. Real or imagined.

I say Bangalore, you say Bengaluru.