I spent some time in Delhi last week and the inescapable conclusion is that the food there is far more varied than that in Bangalore. It's also far better and far more expensive but then I'm not so concerned with the latter. Over the course of a week, I tried Alkauser, Laidbackwaters, Azzuro, Swagat and Flavours. They were all outstanding bar one.
Alkauser 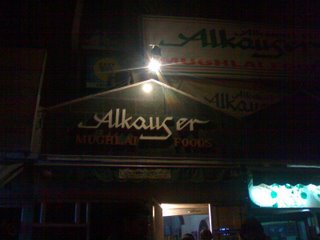 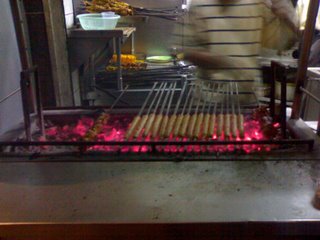 The kebabs were bloody marvelous. The house specialties were Galouti and Kakori kebabs, both of which were out-fucking-standing. Melt in the mouth, enough fat to make your arteries harden with fright, and they were served with a superb parataha, the name of which eludes me. We also ordered some Dal (kinda boring, but it was okay. Not good.), paneer tikka (very, very good. The Northies know their paneer.) and some surprisingly excellent fish tikka which we had to bribe them to obtain as it was the last plate. The biryani, Lucknowi, was startlingly boring. And wet. And the meal only cost us 200 bucks a head. Paisa vasool wonly.
Laidback Waters

Went here the night we got in. Uber-kewl joint it is at the Qutub. Like a lounge bar crossed with a harem. Managed to get the nicest seats, nay beds in the house. Their drinks a pifflingly weak but the food more than makes up for it. We tried some chicken tartlets (inventive but weak on execution.), saffron prawns (fresh but too much saffron.), fish finger-lets (gut. zehr gut.) and a gigantanormous bread basket with the pick being the rasin-nut bread. Main course was a Goan fish curry with rice which made us sing but it lacked in texture, as if they had run the sauce through a blender. Others had lamb with polenta, chingri malai curry and a baked potato and vegetable thingy that was good but preferable as a side to a roast leg of lamb. Dessert was superb with the wine and chocolate cake being the pick. Expensive? You bet. 12K for the five of us.
Azzuro

Small little Eye-Talian place in Saket. But this belies the price (gah! Horrendous!). Food was acceptable. Not outstanding. Fish fingers, bruschetta, red snapper in leek and cream sauce, sole with lemon butter , Caesar's salad and a very very good take on the ubiquitous chocolate fondant. But don't go there. Horrendous service. You're likely to gray waiting for your food. Seriously. I'd much prefer Sunny's or Herbs and Spice.

Very nice place where a Southie like me feels at home, with waiters shouting in Kannada. Food is much like Anupam's and as good too. Which is something because the nearest water body is the Jamuna. Very fresh kane rawa fry and prawns koliwada to start with and the main course consisted of prawns, Manglorean and Chettinad, and some ghee roast chicken. A most excellent meal it was and most reasonable priced too.
Flavours
We had a good salad and some wonderful wood fired pizza here. I'm told the pricing is reasonable by Delhi standards but would be expensive by our Southern standards. Food is pretty good, desserts are nice but the service is a bit stuck up.

Other than these, we did the chaat routine at Chadni Chowk (dang, I'd eat chaat if they could make it like that in Bangalore.), hot chocolate fudge at Nirula's (sucks donkey's balls. You don't know HCF till you've been to Corner House.), lots of wedding food (some simple, some extravagant but all of it brilliant.), McD's (which does take away and only then do you realize how ghastly it can be.), house part food (Penne alla Vodka, and a cold macaroni salad and some eggs and some meat.) and a few more meals on the run. Oh, and Momos at Dilli Haat. Not bad, I expected better and have been told Chanakyapuri is where it's at.

Mostly, I was very impressed with the food and the city. But more on the city later. The only pity was that I wasn't able to visit TC's which was just around the corner.

Oh, did I mention that I was shacked up with the Recluse? Thanks dawg.

Sounds like fun. Likely to do a week there sometime in January, I think. Must do all of that.

You visited Delhi and you didn't got to TC?!! How could you?!

What to do, the trouble with too little time.

Art thou a restaurant critic in the making??

may i add some 'blitzkrieg' and 'kindergarten' and i hope you don't get me wrong on this one.

when may we enjoy an update on the blore eatery scene?

In the making? Surely not, I already fancy myself as one!

Check the sidebar for archives or this link.