Foist, hat tip to MayMad for recommending the place to kill time while in Delhi. It was the highlight of my trip there. Outstanding place.

Quote below the IHC logo of Jawaharlal Nehru saying "You should not tolerate ugliness anywhere in your life, in your activities, in your buildings." RSP Architects and Thomas Associates should learn this dictum and apply it to their work. 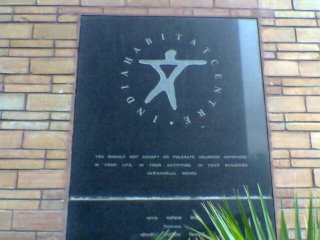 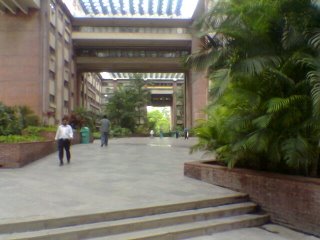 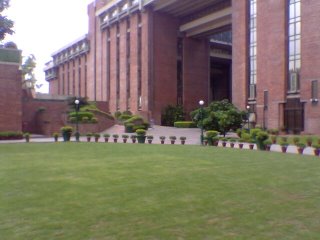 At the Visual Arts gallery, Osian's was hosting this cool Asian Art Exhibition to coincide with their Asian Film Festival. 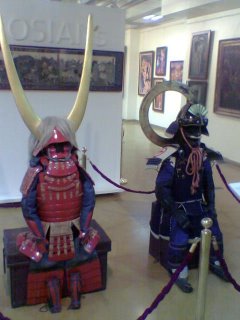 Tourism posters from Asia peddling India and the rest of the Orient.
Clockwise, left to right: Visit India with an Image of the Sanchi Stupa, Orient Calls, Kanchenjunga, Visit India with a reproduction of a fresco from Ajanta. 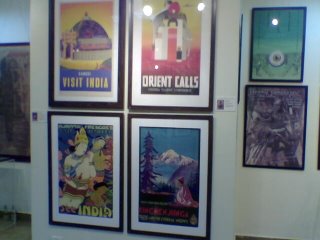 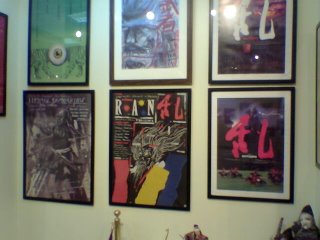 The coolest exhibit on show. Poster of Apocalypse Now. 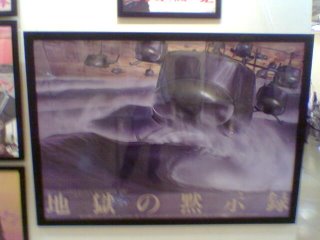 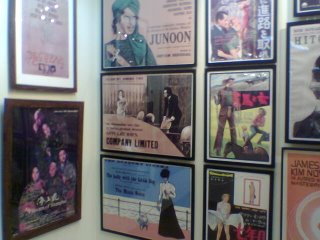 Clockwise, top right: For a few dollars (sic), The Good, The Ugly and The Bad (sic again), Vertigo, UI. 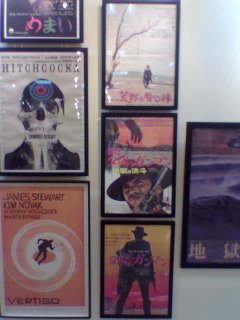 Cartoon from the 70s by Something-Prosad Ganguly. 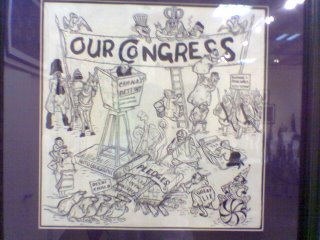 Reminds me of the time I was trying to misappropriate Mohayana's Mao T-shirt. Back in the day in China, posters were the most effective and economical form of spreading the word, apparently. Better than radio, even. 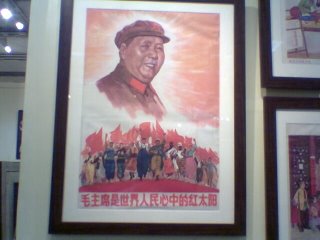 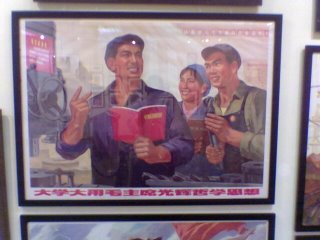 Outside the Visual Arts Centre, in some random lobby were these 2 Madhubani Paintings. 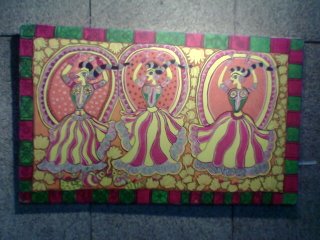 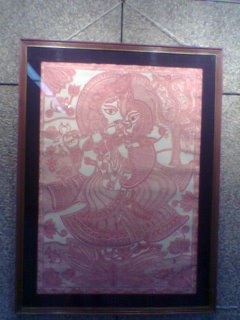 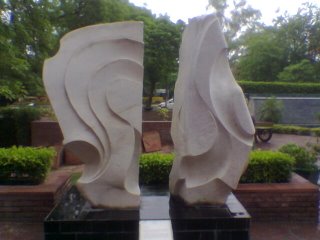 In a place reeking with Indian culture and other such, it's strange to find The All American Diner. Complete with Wurlitzer jukebox. 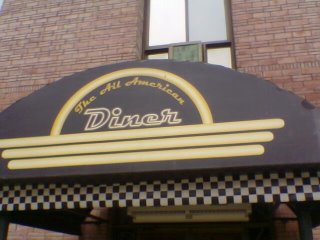 Much fun was had it seems? You went hungry all trip or was the food not worthy enough to merit a post?

So what was on the menu at the AMD?

They had a Hot Dog festival then. But had just eaten a decent sandwich at Cafe ZaffirO at Khan Market, with Aloo (the person, not the sandwich) :-)

Dude, Alu not Aloo... though there is a fondness on Alu's part for Aloo..

Those film posters must be worth a fortune. My friend's mom bought two vintage hand-painted film posters from a collector for their tv room. I think the Mother India one costed about a lakh and a half and the Sholay one was close to two lakhs. They're awesome.
I don't think I'll ever be able to afford classy kitsch.

Would be nice to be able to afford classy kitsch, though.

That's awfully expensive for a poster, no? Then again, MFH started out painting filmi posters...

Welcome back Dill!
IHC was the college in Rang de Basanti.
They have a very nice British style pub on the top floor called Past Times. And a delectable Chinese place called Oriental Octopus.

Recluse, welcome back to you too!

Shall check out the other places the next time one is in that neck of the woods.

Damn! When will Bangalore get a place like this?

When it becomes the capital of the country and has both State and Central Revenues coming in.

Recluse, are you nocturnal or just an insomniac to boot?