Went to Zen with MadMan and a couple of his friends for their seafood buffet last night.

If you want to stop reading here, then here's my take: Don't go. Not for the food, not for the ambiance and certainly not for the value for money proposition. Worthy and far superior alternatives are, T'chi for Chinese, Harima for Japanese and Shiok for Thai. 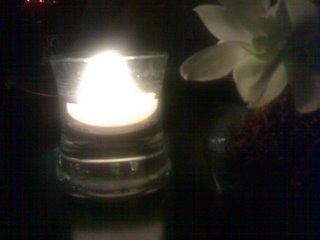 Their insipid and uninspiring salad bar was a motley collection of soggy vegetables in the same bloody dressing. The beef salad was good, insofar as the beef was good, but they overdid the celery. Everything else was best left alone. 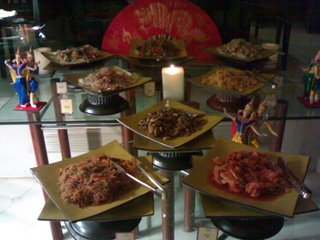 The sushi and sashimi bar was, well at best it was bright. A boring selection of fish of which the best that could be said that it was fresh. Ish. The ubiquitous tuna (no toro), salmon, octopus , mackerel (which was better than I imagined it would be) and some very good jellyfish. But there was no chef in attendance nor were there any name-tags to identify the food. Shoddy service really. I don't really like sushi, tried some, wasn't bad. But certainly not good. 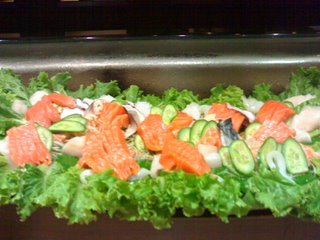 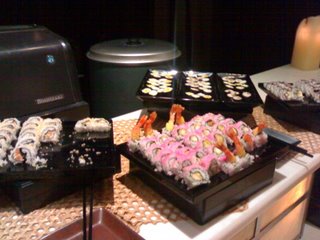 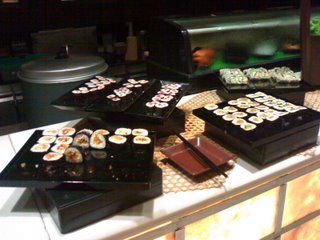 The trouble with buffets is this. Heat lamps and induction stoves. They keep things warm but food also ends up over cooked, dry and pretty damn unappetizing. Their main course options were an unimaginative rice/noodle/beef in oyster sauce (again, good beef mediocre sauce)/chicken with cashew (ooh! Indian Chinese)/stir fried veggies (that collapsed into goo)/prawn green curry (hideous)/fish in sweet soy sauce (Yaaay! So exciting!) and crab in black pepper (taken out of the shell. No fun.) 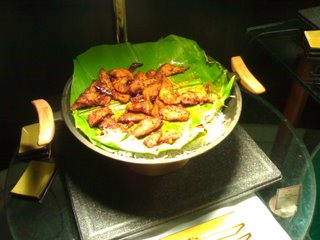 They had this counter where you could choose your raw fish and it would be grilled and served, the only choices being "Spicy, sir or medium-spicey?". They had pomfret, red snapper, lady fish, tiger prawn, lobster, salmon, scampi and a few other local varieties. Safe to say it was middlingly ordinary. Piddlingly so. 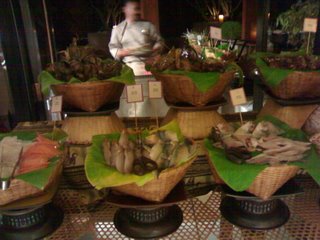 They also had a few satay starters. Pity they all tasted the same, burnt to a bloody crisp. 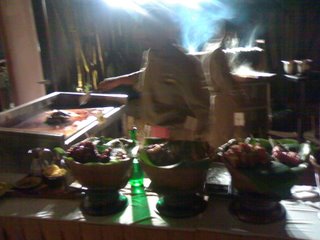 Dessert encompassed the usual suspects. The fresh fruit was the best option along with a Chocolate Mille Feuille. The chocolate fountain had, what could be best described as, Amul chocolate in it.

This is no gustatory pleasure. The focus is not on the food, quality or appearance. It's more an experiment in excesses. I 'll give it a pass in future and would recommend you do the same.

In order of eating:

How much (incl taxes)?

ha ha, everyone should stick to Impy's and Chungs. Why you try all this fany fancy naatak.

This coming from you !

(Chungs it seems. What bloody bollocks!)

Well, there is a Chung's corner three buildings away from Shiok if you so desire. :)

I'd prefer Wan Ley to Chung's, being discerning with the cheap Chinese places...

yes maybe, but I will never forget my roots !! ( Which is Impy's and Chungs!!)

I need for something blog-able in my life to happen before I can blog.

Hey, first time here. I saw one of your older postings had a line that ended "..and yes, he's a Cottonian."
You guys Josephites? Fide et Labore and all?
-MT

I am. Very much so. But I did defect to the enemy for two years.

Why do you ask?

Unfurl the flag of faith and toil my blue and white brudda. I'm from the batch of '90 - probably senior to you, but I bet I know a lot of your classmates.
Don't worry about having to spend 2 years up the road. Traditionally Cotton's house captains have been ex-Josephites. We have to send a few of our best and brightest there every year to provide some leadership for those pansies.