Spellcheck on the title done. (Thanks Grammar Nazi).

Trigger Hippie, Bal and I went to Zero G last night because we heard Rave Magazine was sponsoring a Kailash Kher concert-thing. (It was actually a private party, which we kinda crashed).

Glad we did, though. It was by the pool with people sitting all around and the stage/mattress on one side. What the pictures don't tell you is the beautifully chilly weather that was well, beautiful. Bangalore man! 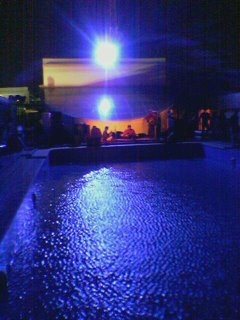 Prakash Sontakke on Indian Guitar (don't ask, I don't know), Sankarshan (from Hook) and another chap on the ghatam were pretty cool. Then Sankarshan came back with some other dudes, one of whom made his electric guitar sound like a violin, veena and a tabla. Trippy shit that. 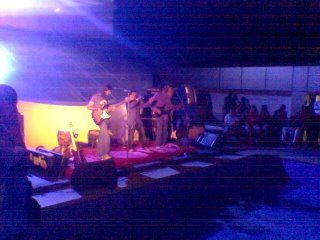 Kailash Kher was quite outstanding. Unfortunately, we had to leave before the performance ended, which was still going on at 1145. Gasp! Where were the police?

Coincidentally, the soundtrack to the first video on this post is Kailash Kher!

The singer on THAT video is not Kailash Kher. Its Nusrat (and dont tell me thats a cover version etc).

But yes, Kailash kher is brilliant. You have to listen to the album Kailasa. Those 2 dudes who help him with the song writing and the arrangements used to play for a bombay band called "Bombay black" (i think).

CW: Blame Dilettante for that. His idea! ;-)

BB I think we should let dilettante stick to G Unit.