In spite of my best efforts, I managed to wake up at 5:30 AM on Sunday. Dilettante called to see if we could get breakfast at ICH (India Coffee House, for the uninitiated.) but I had promised Trixie that we’d do a Leela brekker before she left Down Under. I am a morning person but she isn’t, so after much cajoling we settled to meet at 8:15. 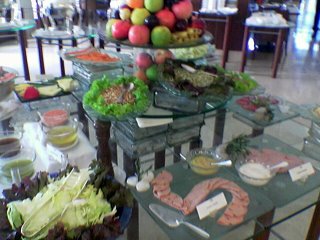 The Leela Sunday Brunch is now a Bangalore Institution but their breakfast buffet is pretty good and great value for money. They have an awesome array of breads, fresh fruit, juices, cold cuts, other meats and a whole a la carte menu as well. The cold cuts were pretty good, salami and the other usual suspects of a chicken loaf and some parma ham. They also have smoked salmon, which is nice with eggs, cream cheese and some chives. 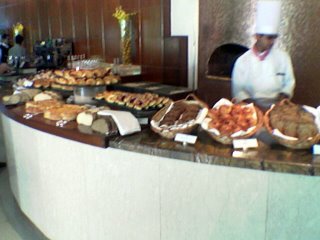 Their bread selection is outstanding. All of them freshly baked. My only complaint is that they don’t use Amul butter. That’s they butter we all grew up on and is so the best butter in the world! 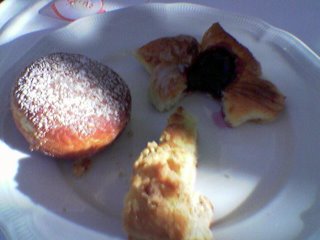 Featured on my plate is a Berliner (of JFK’s “Ich bin ein Berliner” fame.), which is a cream, filled donut of sorts, an apple and cinnamon brioche and a blueberry danish. All of them outstanding. Not too sweet for breakfast, fresh and warm even. 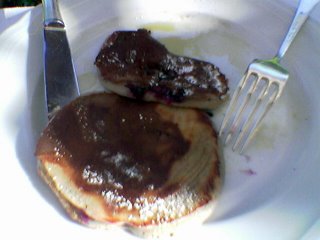 We then had some blueberry pancakes with melted butter and maple syrup. Exceptional. The only let down is that it isn’t real maple syrup, you’d think the Leela could spring for the real stuff. 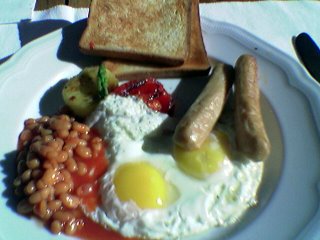 I had a fried egg which is served with grilled potato, tomato and asparagus with a chicken sausage and some baked beans. They are politically correct to a fault, no bacon or pork sausages on the buffet. Maybe one needs to ask for it. They also do super omelets of the rolled over type, not the French soufflé or the Indian chappati type! 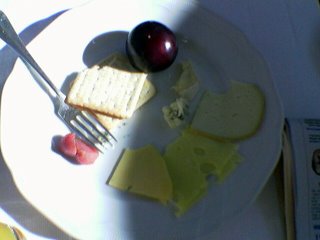 Some cheese and fruit to round off the meal. They do, surprisingly, serve some stinky (yet so so good) French cheeses at this early hour. Blue and Camembert might be a wee but too strong for breakfast, what?

For the brave, try the Japanese miso soup along with the fried rice and grilled mackerel. Yes, they eat that for breakfast!

Coffee and tea to round the meal off.

One of my favorite expensive breakfasts in Bangalore!