Aleph and I decided that our occasional workweek lunch was in order today. I thought I’d club it with a hajaam visit at Mirrors & Within followed by lunch at Cha Bar but decided against it, couldn’t bear to sit for the requisite thirty minutes it takes.

So, then, picked Aleph up and headed towards Indiranagar in search of food. Choices were Cha Bar (ruled out since the haircut was off the cards.), Treat (didn’t feel like heavy Indian food.), Take 5 (propensity to be closed at inopportune times.), Annachi (the trauma is too great to sit through office after.), Herbs & Spice (would have been once too often.), The Beach (yeah, right!), 100 ft. (hmmmmm.) and finally landed up at Road Trip.

The place was pretty empty for a Friday afternoon but we were undeterred. For those of you who have not been there it has a very strong biker oriented theme, which is nice if a bit overwhelming. Bikes in the walls, on the tables and strange lighting fixtures, to wit: 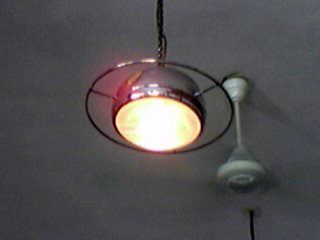 I can’t see it being very functional and doubt it discharges sufficient light at night. But then, given the food, you may not really want to see what you are eating.

We shared a plate of fish nuggets as a starter. While we were expecting breaded white fish flakes, what we got was week-old fish in some sort of egg wash and fried to a crisp. To be fair, the texture was good, crunchy on the outside and soft and flaky on the inside. It’s just the fish that I take objection to. Served with some unrecognizable variant of tartare sauce that turned out to be a rather wishy-washy mayonnaise with onion. 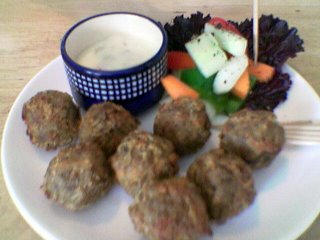 Aleph ordered a fish with lemon-butter-and-parsley and I (in anticipation of my impending conversion to ovo-lacto-pesce-vegetarianism) had the beef stroganoff. I get lots of grief for ordering the stroganoff, whether it is at Only Place, Casa Picola or Sunny’s on grounds that it is no better than a curry-rice combination. That has never been truer than at Road Trip. It was an abomination of an excuse for a stroganoff more like a Mallu curry with rice. All that was missing was the ubiquitous pappadum. It wasn’t bad for a curry but it was horrid as a stroganoff. No cream, no sour cream, no onions, nada. Stick to the chicken stroganoff with rice at Only Place. Aleph’s fish was a debacle on a similar scale. Icky fish, no signs of the rumored lemon-butter-and-parsley sauce and covered in some unrecognizable goopy potato concoction, boiled fettuccine drenched in soy cream, I could go on but then I’d have to ponder the meal all over again. 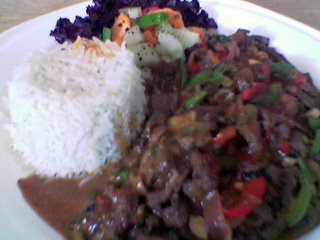 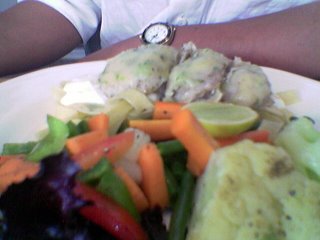 Dessert, which I hoped would save grace, was a choice of coffee or vanilla ice cream. Coffee it was, turned out to be a frozen version of Southern Railways coffee. Sickly sweet with a hint of caramelization, a pale milky imitation of coffee. 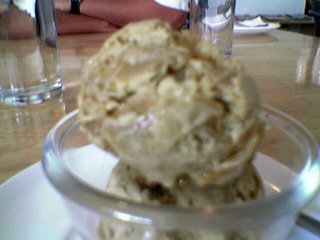 P.S. The only good reason, to shop at Namdari nearby. Which is a story in itself, organic my ass!

These guys obviously haven't improved from the time I went, 2 years ago.

Fish? Beef? We're all being careful now, are we? ;)
By the way, I agree with the 1.5 rating - its actually one of the miracles of Bangalore that the place continues to stay open. I mean, the bikes are good, but hey, surely you need a little more, no?

That be true. And dude, chicken is a vegetable.

Have been to RT since 2003 n by far the best fish I'VE ever tasted. Could be biased cause i live round the corner (so no bummed i-had-to-drive-thru' traffic issues), but those guys have consistently impressed with the goods.

Really? I was very annoyed with the quantity on my plate for the price they were charging but I didn't like what I had ordered so the miniscule quantity was a good thing probably.

Methinks Indijoe is far better bet, if you live in that area. Anyway, as long as you like RT...

Nah, indi is too greasy, n like u said...lunch buffet, like the rest of bangalore. I like to be unfussedover, so the slow(er) service at RT is jes foine. liked Opium (previous avatar of Indi). Hate the Beayach. Latr. phew. may logon to this blog after all.