Given the furore that the Imperial vs. Empire debate has caused on this blog and given that the kebab question has now been answered (49% prefer Imperial chicken kebabs to the Empire ones. I can't disgaree!) I was finally able to visit Empire. This review is of the Central Street branch. My quick take: Empire has enough, kebabs apart, to want to dine there.

Our evening began at Windsor Pub where the beer was accompanied by the usual 'snackes' followed by a short detour to, ummm, build appetite as it were.
For six of us, we ordered a lot. And I mean a lot. One grilled leg of mutton (raan), one grilled chicken, one and a half kebabs, one ginger chicken, two brain fry, 12 coin parotas, 2 kerala parotas, 2 ghee rice and sulemani to round it all of. I do believe it's the first time I've ever paid a bill of over Rs. 1000 at either Empire or Imperial. And yes, we finished it all. 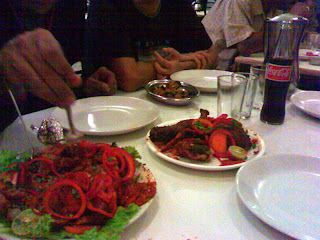 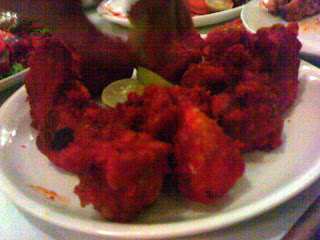 Honestly, I can see myself going back soon. Not for the kebabs, they weren't a patch on the ones at Imperial. Not by a long shot. But, the grilled chicken was superb. Far better than the stuff you get at Imperial or Siddiques. The raan is also excellent, I'd be happier if the crisped the outside a bit, and such good value for money but it does have far less meat than you'd expert. Oh, the grilled chicken and the raan are best with roomalis not the KP/CP stuff. The brain was very different from the pepper fry at Imperial and it wasn't necessarily worse and is worth trying. The ginger chicken, as Chinese as it sounds, seems to be a burial ground for leftover tandoori chicken which isn't necessarily as bad as it sounds. In fact, I liked it. Enough to want to go back and try it again. Personally, I prefer the parotas at Imperial but hey, don't let that cloud your judgment. There's not much between the two. However, the ghee rice/gravy and the sulemani, are far better at Imperial. 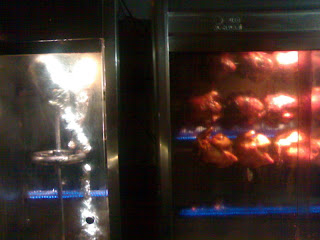 So there, my review. Finally. Feel free to disagree/agree/comment below. I'd love to hear from you. As an aside, what's with the bombastic names? Imperial? Empire? Paramount?

I'm not disagreeing with your premise that Imperial is better than Empire, but the KPs suck at both places. The dough is fine, it's just the execution.

Aleph: Actually, the best KPs are at Savoury. Nice and thin, quite unlike the 3 inch thick ones at Empire and Imperial.

Yeah, Savoury has some good stuff.

We should go, no?