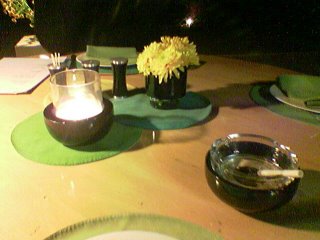 Jenx (and mother.), Aleph, Alu, Dilettante and I set out for dinner at Grasshopper last night.

I still remember the first time I went there, the road past IIM was desolate and in bad shape. This time, the road is still in pretty bad shape (but for a divider and signs touting "India’s First Public-Private Road Participation" which obviously went nowhere.) but there is development much further down the road. This does detract somewhat from the back-of-beyond charm that Grasshopper had but the food more than makes up for the ride there and back (which is an ordeal, given the mellow glow the meal induces!)

Right, on to the food then. A bottle of the Sula Merlot was ordered while the rest of us had ginger-lime sodas and one fresh-lime water. The ginger-lime was better than the one at Sunnys. The wine, by other accounts, was tolerable.

Grasshopper functions on a Table d'Hote [could very well be a Prix Fixe basis. Never did understand the distinction.] You call them a day in advance and tell them if you have any particular aversions or quirks as to what you will or will not eat and they prepare a 7-course meal accordingly. The first few times are exciting simply because you have no idea what you will be served. Unfortunately, they don’t refresh their menu as often as I’d like so you end up repeating courses over the span of several visits. 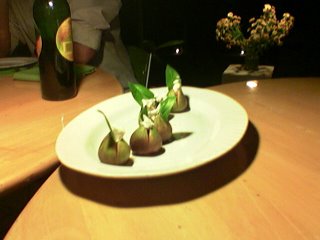 The first course was Indian figs baked with feta and basil. We’ve had it many times before and always enjoyed it. The sweetness of the figs interacts wonderfully with the richness of the cheese to produce an enjoyable composition that is enlivened by the sprig of basil. 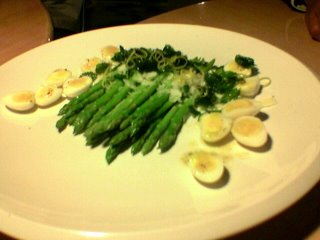 The second course was young steamed asparagus served with butter, fried basil, lemon rind, freshly shaved parmesan and boiled quail eggs. This old favorite has been reworked by the addition of the quail eggs. The combination works very well, the tartness of the oil mellowing the richness of the cheese and butter while the fried basil leaves adds texture beyond that of the asparagus. The eggs are an interesting side that, to me, don’t add anything to the dish per se, but I like quail eggs and enjoyed them thoroughly with some fresh bread and the drippings of the sauce. 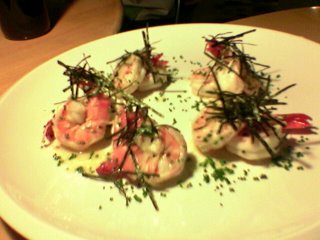 The third course was of sautéed prawn, large ones at that, with sesame, ginger and seaweed. Prawn features regularly on their menu and it’s a good thing it does. They obviously have a reliable supplier, whose name they refuse to share and they treat the prawn with care. Not overcooked, the spices are a nod to the orient and this is a great way to the break up the parade of nouvelle cuisine thus far and prepare for the next few courses. We enjoyed this one thoroughly. 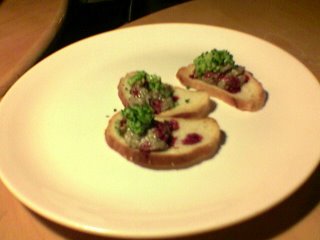 Alu, who refuses to eat anything aquatic or amphibian, had to be content with some amuse bouche of mushroom pate with a zucchini garnish and served with a pomegranate jus. He seemed happy. 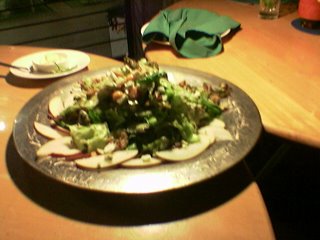 The fourth course was a salad. Pears, walnut, mixed greens, indian gooseberry with a blue cheese dressing! Inventive that, adding the gooseberry makes an ordinary Waldorf-esque salad special. Bursts of intense flavour that punctuates the occasional mouthful. The pears (or apples) and walnut are a classical mix and the addition of the blue cheese gives it a well-rounded richness and flavour. All in all, this salad is a worthy successor to their usual peanut-dressed one. It combines an array of flavours, textures and colors. 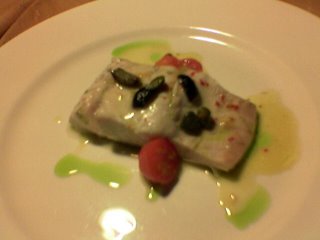 The fifth course was fish for us barring Alu who had to be content with some chicken. Sea bass that was lightly poached and served with basil-olive oil, capers, paprika and cherry tomatoes. Probably the weakest of the main courses, the fish was excellent, just that the combination lacked a certain oomph! I did enjoy it very much, such fresh fish cooked to perfection is hard to find. The basil olive is something I need to add to my cupboard, full of flavour and a nice green colour too! 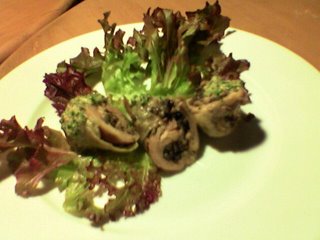 Alu’s chicken was essentially a chicken breast stuffed with mushroom, grilled and served with a rather zesty mustard sauce. I tried a bit, his jootha fundas notwithstanding, and it was very good. The mustard had a Bengali touch to it, raw and fiery but capable of working with the other flavours on the plate. 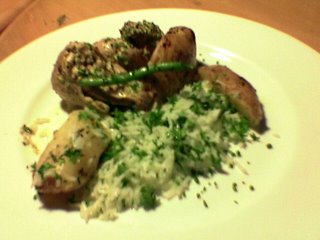 For our sixth course, Dilettante was served the aforementioned chicken on a bed of parsley rice with oven-roasted potatoes and buttered runner beans. 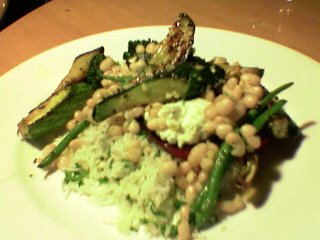 Jenx’s mother had the same rice served with white beans and ricotta while the rest of us had the aforementioned rice and potatoes alongside grilled veal chops. 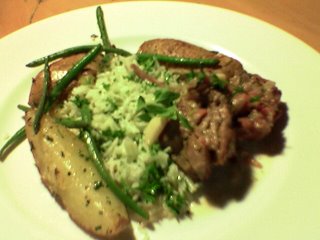 Dilettante liked his chicken, the rice with ricotta and beans was similarly appreciated and I devoured the veal chops. Tender and undercooked, just how I like my meat. The potatoes were excellent too, crisp skin on the outside and moist on the inside. They serve a similar veal chop but with a blue cheese and butter dressing. I think I prefer this version as it lets the flavour of the meat come through. A grand end to the main courses. 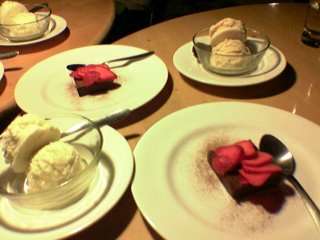 Dessert was a choice of lemon cheesecake with grape coulis, chocolate truffle with fresh strawberries, lemongrass ice-cream and fig and honey ice-cream. We skipped the lemon cheesecake as it has consistently been a let-down being a gelatinous flavorless blob. The truffle is a revelation, decadent and sinful, rich and heavy as lead. The fig and honey was, in comparison, mediocre but the lemon-grass ice cream is worth travelling for. It has one of the purest flavour notes I have tasted in a while and it breaks down on the tongue so well. Refreshing and cleansing while a tad exhilarating! However, if they ever offer you a basil ice-cream, do not hesitate and order two. I’ve only ever had it once and it remains elusive to this day. It was an unbelievably impressive dessert!

must agree... this place is da BOMB!
excellent food, wine is decent (and there is lots of it).. plus you can BYOB... just try not to make it 'limoncello'... that stuff blows.

The only thing it blows is your mind. I'm sure Paz would agree, no?

who said limoncello.....where is it?? i need some limoncello !!!