First, I'm not sure how to give points on these restaurant reviews that BB and I do except this rating indicates I really like this joint.

Herbs & Spice is tucked away in a quiet corner of Indiranagar, near Rashmi Eye Clinic and IBBC's Victory Grounds. No advertising at all, just word of mouth popularity over the last few years and a little confusion with names, what with the former Spice Garden on Whitefield Road deciding to call itself 'Herbs and Spices'. 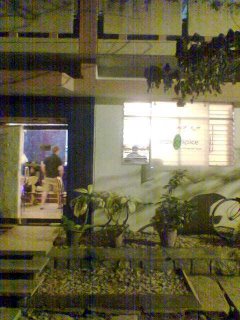 2 gentlemen, Pankaj and Manjit run this restaurant - a lady used to be their partner when they started out, no news of her. It's menu is constantly changing, they always keep less than 20 items on the menu, which is written on a blackboard with chalk (so you can eat their cheese). Sorry, couldn't resist. 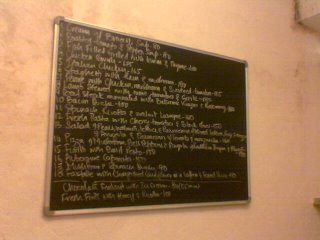 This is a view from their extended interiors meaning they doubled their seating to 10 tables! 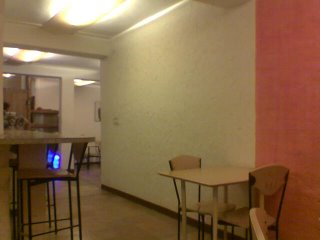 Assorted breads are constantly replenished and they aren't stingy like Sunny's where you are billed for extra. 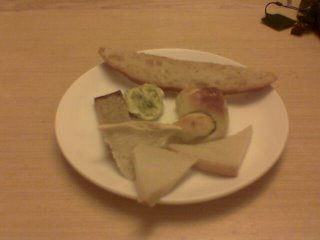 Soup was Cream of Broccoli which Girl from Oz, GFO for short and I shared. The soups are usually brilliant but since I'm not such a big fan of broccoli, I felt it wasn't that great but GFO loved it. The other soup on the menu was a tomato soup. Now tomato makes me gag.

This menu is small but does offer enough choice for most people. Now all of youm know how fussy I can be, this place still offers at least 2 entrees I can choose from. 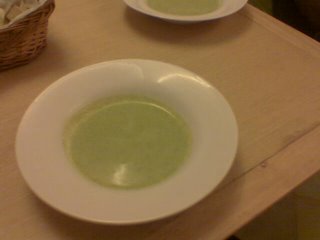 Dinner was Fish Fillet with Olives and GFO ordered Penne with chicken, mushroom and sudried tomatoes.

The fish was just right, soaked in olive oil with a little chopped olives on the side and dressed ghaas-poos on the other side. Nice. Made nicer with a drop of squeezed lemon.

This combination of penne made me order the same dish in many other places, often with disastrous results. The creamy sauce the penne is soaked in is dee-lish. These guys are good. 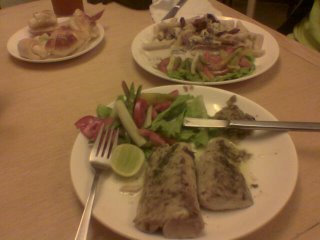 Now desserts were the first reason I started coming to Herbs & Spice when I was a student and couldn't afford a full meal (which is not to say the desserts are cheap).

Walnut meringue was shared with the 2 little dessert forks. Don't see the Pavlova that often though. It was the most awesome thing I've ever had. Little slices of kiwi fruit and strawberry placed on half a slice of the meringue and cream. *sigh* 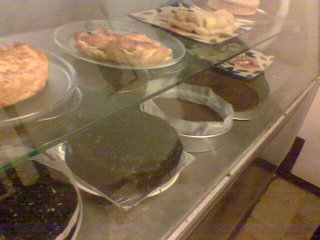 The fact remains, outside of the Casa Piccola chain and the 5star hotels we didn't have much of an option for Italian. Herbs & Spice was one of the first and remains amongst the best Italian/Continental restaurants in Bangalore.

The waiters are friendly and not snooty, even though it's a lot of fun trying to decipher what they are saying. The source of ingredients, I've been told by someone reliable, is the same in all the leading Italian restaurants in this city. Yet the prices in Herbs & Spice remain significantly lower.

Update (30 Jan 06): Bangalore Bytes was at Herbs & Spice with a couple of friends and I joined them in time for dessert. They weren't too happy with the food, complaining the quality went down and prices went up. Strange. In 3 weeks. Maybe it was an off day.Anyhow, was chatting with Mr. Bytes online and here are excerpts of the conversation. (Names changed to protect superhero identities).

Dilettante says:
what dyu want me to say?

Bangalore Bytes says:
that it was a disappointing meal. tasteless hot water for a consomme, over fried leather for fish, insipid pasta and no salt or herbs in anything. that and the abomination of the new bread basket,

Anyway, I had a good dinner 3 weeks ago.

Posted by Dilettante at 3:36 PM

Really is a fabulous place. My pick is their bacon quiche, pear, walnut and parmesan salad and the eggless chocolate cake.

Can I independently review the place too?

Quiche! You forgot the quiche!
I miss the baby croissants-only plates though. Their new breads in the basket are unbuttered and hard.
Oh, and try the Paris Breast. SO good.

Chamique: Like I said before I have weird-ass food fussiness, things such as red meat is one of them, hence no bacon quiche.

No bacon my a*s. If the bacon is wrapped around a prawn it's ok? The key, then, is to wrap food you wouldn't otherwise eat around food you like... ;-)

news of the 'missing' lady ex-partner...last i heard she was in UK and happy....

herbs and spice is the bomb...it is the only food place in bangalore that i have really missed ...am hoping the place hasn't lost its charm after the expansion...

unless the chef has changed since i visited a year ago, there are two reasons i am unhappy about this rating:
1. its higher than imperials
2. its not that good.
dont get me wrong i think the food was pretty decent. but they didnt have a single table that could seat more than two people. for the first half of the meal i thought Dilletante and BB were making passes at each other.. turned out that the (lack of) leg room under the tables was causing the problem. at least thats what they told me...