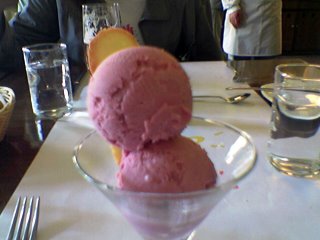 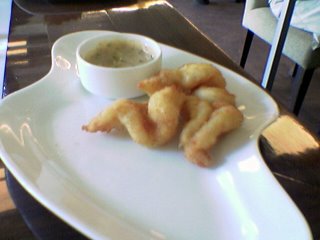 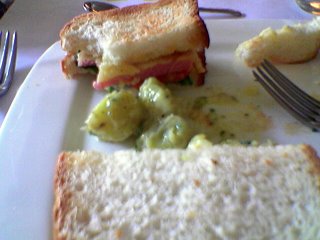 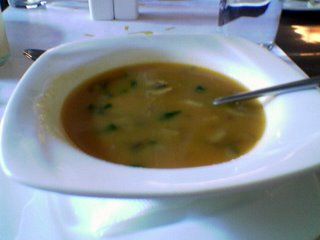 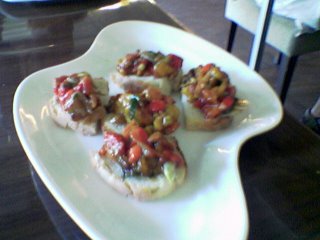 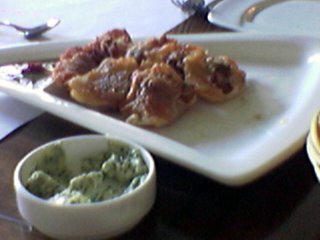 Met a few friends, some long lost, for a quick lunch at Sunnys. I should have known better and arrived a half hour past the appointed time but I hate being late, even notionally, and so Mache and I landed up a good 30 minutes before any one else did.

As I had to have a quick lunch and scoot (meeting you see.) I had a mushroom barley soup, a ham and cheese s'wich and some rasberry ice-cream for dessert. The soup was pretty good, though Mache opined that it looked like sambar, tasted much better though and actually looked like mulligatawny! The s'wich was pretty good too, a nice mature cheddar, great bread, a dressing that complimented the filling (english mustard, honey and something exasperatingly difficult to identify) of ham. Only issue was the ham, Danish pressed and tinned ham needs all the help it can get which the cheese and the dressing rescued quite well. The potato salad was le magnifique. New potatoes in a creamy mayo-type dressing with some parsley. The ice-cream was outstanding. Tart, not too sweet and creamy while the flavour of the rasberries shone through.

The others had a few starters, golden fried prawn (why oh why, might as well have been at Little Chef where the prices are cheaper and the portions more generous and it tastes about the same. A tartare sauce isn't wortha all that much.), lamb dumplings (ibid.) and some bruschetta with olive marinated vegetables (didn't try it, won't comment. Suffice to say it was vegetarian.)

I had a ginger-lime soda too, it's a nice change from the fresh-lime soda. Plus ginger is a wonderful digestive and easy on the stomach.