Since V's wedding was in Bangalore, a sizeable portion of the family were here last week. One arm of the family went off to CBT and were in transit again in BLR on way back home to HYD.

And my parents and I were going out for dinner with that arm. I got to Forum (pre-arranged rendezvous) earlier than everyone else and was informed a table for 8 would take an hour at Sahib, Sindh, Sultan so phone calls were made and chosen modes of transport were redirected to Magnolia which was nearby and was quite a nice little place, at least from what I remembered.

When this restaurant opened, it was this lovely, charming place in a quiet lane in Koramangala - the Chinese and Thai food was great, the interiors were nice in pink and black. All very good.

I proclaim that we order Chinese as the Thai was not that great the last time I was here. And how do you think was the Chinese? It was a disaster.

Now getting on with it.

The vegetarians ordered some Veg Clear Soup. The rest of us ordered Chicken Wonton Soup. The wontons in the soup were rather small but made up for in number. The soup itself was dark, like mulligatawny and had little droplets of oil floating on it, like rasam. 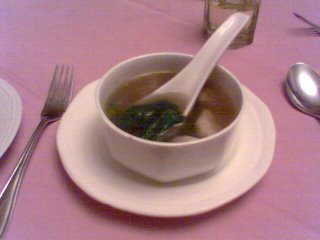 Starters were Thai Chicken Satay and Veg Springrolls. The springrolls were alright, just a little overdone and the satay was burnt on the outside and just a little rubbery to chew. 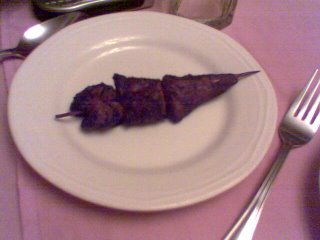 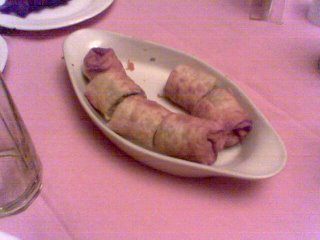 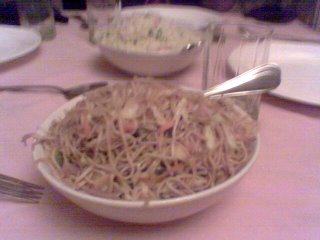 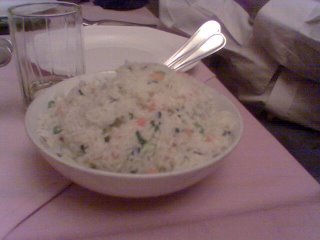 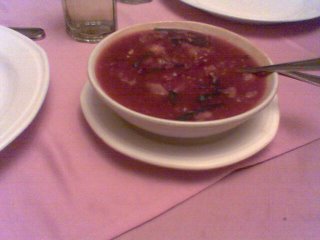 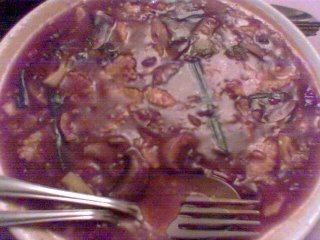 When ordering for a largish table one goes with tried and tested dishes, yes? Thank you.

The rice and noodles were in the same league as the erstwhile Little Chef (yes, that of the Fiat car doors for tables).

The Chicken and the Baby Corn-Broccoli were nothing to write home about. Ironic that I'm writing about them on a blog.

Didn't bother with the desserts.

Posted by Dilettante at 5:39 PM

Is it just me,or is everything pink in the pictures?

Yep the tablecloth is pink. Offset by black furniture.

Used to be pretty when it was new. Now it's gotten old and has spots...

I vaguely remember you were looking for a review of Copper Chimney. Well here is one by someone I know of. Sounds like your kind of place.

that 3rd pic spring roll(?) looks like amaanat of bobitt

Dude, Dilettante, wtf is with yo' camera? While the tablecloth is pink the fug does the spring roll look pink too?