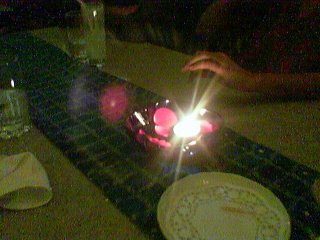 To kick off, I went to Legend of Sikandar last night with a few colleagues from work.

Getting to the restaurant is pretty messy, given that it is at Garuda Mall and moreover, last night was dance night or some such idiocy at the Mall. The place exudes a very intimate allure (bordering on adulterous, a lot like the vibe at Cinnamon) with the tables by the plate glass windows being the best in the house.

The liquor menu is well and good, nothing to get excited by and the best drink in the house is actually on the main menu, some concoction of oven roasted green mango that is thick, warm and tangy to the point of surprise.

The menu is a revelation; they’ve gone for the understated appeal of presenting only a few selections, which is something I appreciate. Appetizers were a lamb seekh kebab, which was, as with all of their food, generous (don’t, dear reader, believe that portion control was the highlight!) moist (how often one is served leather to chew on) and most importantly, restrained in spice to allow the flavour meat to stand out. A chicken noorani kebab that was good without really aspiring to the greatness of the seekh and an outstanding potato creation called aloo took. To be fair, the english translation was smashed potatoes, but this was so much more than that; pan-fried baby potatoes that were slow fried to allow a crust to form without the inside drying out and then lightly tamped to bring out the moisture and flavoured with a delicate spice blend that bordered on chaat but without the horrid hajmola flavour that would have destroyed it. An absolute marvel that, and this from me a carnivore.

Given the appetizers, the main course would really have to dazzle. Lamb shanks served with sheermal, (made the Samarkhand version look positively ordinary), chicken legs cooked in an almond paste (sinful, divine albeit chicken. Chicken ought to be a vegetable.), fish something or the other (the best that could be said about it was that it was fresh and not over cooked. Fish isn’t something that Alexander would have eaten and isn’t something I would have orderd, but Mr. Banerjeee decided otherwise and who am I to argue with a Bong over fish!), a house dal (not bad, yet monotonous. Best black dal in Bangalore? Aangan and Jamaavar.) and a yakhni mutton biriyani. The biryani was terrific. The lamb (couldn’t have been more than 24 weeks old) was fabulous, the flavours delicate and the whole thing had so much of a bouquet.

Dessert was a tad boring, an apricot trifle, (pass.), a kulfi with rose petals (not bad but clichéd.), and a baklava with ice-cream (the best of the lot.)

All in all, a great place to go to if you don’t mind dining in a mall.

Guess even that chef who knows nothing about blast-refrigeration (or something) will appreciate this review ;-)

must check this out..

did not know that it was managed by Manjit too..

thanks for passing by my blog

I must go back and try it again. My only experience of the place was bad but if so many people enjoyed it, I gotta go back and do the old benefit of the doubt thing...